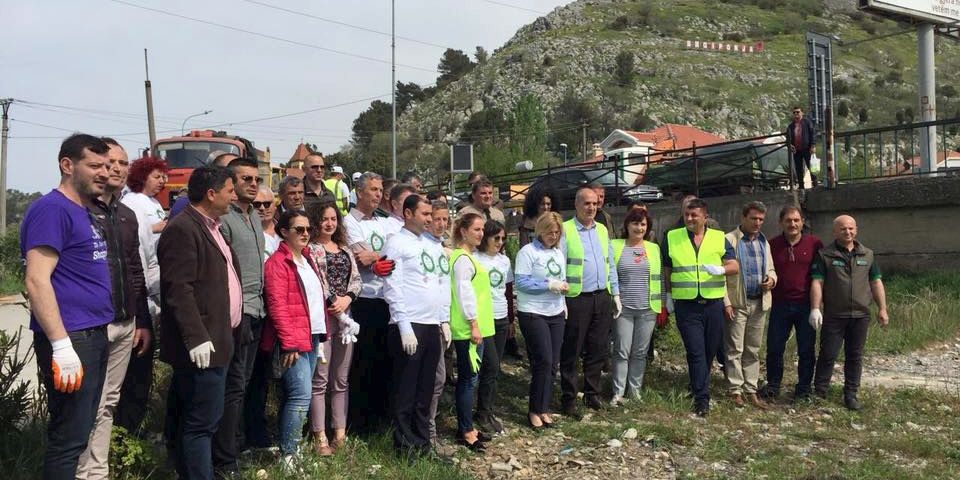 In the framework of the national campaign “Let’s clean Albania we want!”, launched by the Minister of Tourism and Environment, Mr. Blendi Klosi, on 24 November 2017, dldp encouraged the partner municipalities of the program to join this initiative. The program received positive reactions from the municipalities, whether in concrete actions or in the willingness to continue this initiative in 2018.
At the beginning of 2018, dldp supported 6 partner municipalities (Shkodër, Lezhë, Malësi e Madhe, Pukë, Dibër and Shijak) with financial resources and technical assistance so that each of them could organize few weeks campaign following the action “Let’s clean Albania!”. This campaign aimed not only engaging municipal staff in awareness and mobilization of the community for cleaning the territory and cleaner environments, but also in actions and concrete interventions at problematic points.
The first important achievement of this campaign was to strengthen the institutional cooperation between the local government and the territorial branches (decentralized agencies) of the central government. Thanks to the coordination of the program and support from the Ministry of Tourism and the Environment, the working groups in each of the municipalities coordinated their interventions, had the support of the Prefect of the Qark, of the territorial branches supported, and organized joint actions with the forces of the Ministry of Defense. The harmonization of these actions and interventions took place especially throughout the week from April 16 to 22, culminating in the general action in each of the municipalities on the Earth Day, on 22 April. The dldp partner municipalities’ continued this campaign even after this date, covering activities throughout the preparatory period before the beginning of the tourist season by the end of May.
The 6 municipalities involved in this campaign were intensively supported by technical assistance from service providers (REC, URI and MIA) to prepare work plans, identify hotspots for municipal interventions as well as stakeholder groups who would join the initiative. At the end of March, were organized meetings with all local actors to determine the contribution of each actor, the results, the expected work volumes that would help both in finalizing the budget and in taking measures to find the means and the necessary equipment. At the beginning of April, the municipalities focused on documenting the problematic points, possible quantities to transport and preparing the necessary procurement and contracting documentation (where needed). While in the period 10 April – 31 May, all municipalities, in cooperation with other local, regional and national structures, organized several cleaning activities spread across different areas throughout their territory.
Other important results were the engagement of the private sector and volunteers from local, local and national institutions, as well as combining community-based cleaning activities. As a result of this engagement during the campaign, there were not only activities with the schools and dependencies structures of the Ministry of Tourism and Environment, but also concrete commitments and contributions of the private sector to make available free of charge the means and workers in the collection and transport of inert waste and mixed ones, squares and planting trees.
In this campaign, the role of the schools involved, apart from awareness, was also the promoter of mobilizing additional human and financial resources from the private sector, institutions and individuals. Awareness raising with schools, competitions with recyclable materials, performances and visits besides growth and education, enriched the social and cultural life of villages, administrative units and cities in these 6 municipalities.
The direct engagement of the dldp program, municipalities and partner institutions had concrete field results by enabling collection and depositing at the Bushat landfill or in the landfills of Puka, Porto Romano and Peshkopia of an amount of more than 500 tons of urban waste. Within this action are cleared hot spots, street sides and residential areas transporting nearly 2800 m3 of inert waste to the collection points. 110 trees and decorative trees have been planted, 1600 volunteers have been engaged by public and private institutions, 23 private companies have provided their assistance with tools and manpower, 8600 students and students have contributed and participated in joint activities.
Such a campaign obviously influenced the enforcement of communication of local government structures with the community, meeting needs and expectations with reality, establishing bridges of cooperation between institutions and identifying weaknesses in management.
Despite the positive results achieved, in such a short period, each of the municipalities has already outlined its lessons learnt about the way of organization, and the appropriate actions for environmental protection and territorial management in the future. Beyond the more informed people, more waste accumulated, this was the main success of this campaign.