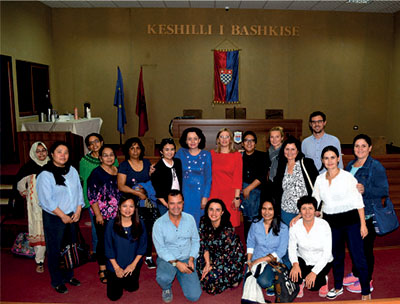 Although most women around the world have the right to vote and to run for office, there is a big disparity between the number of women and men who are actively involved in politics and who hold seats in elected bodies from local to national level. Furthermore, the issue is more than simply about numbers: it concerns women politicians’ influence and impact both within their parties and the legislative body to which they may be – or aspire to be – elected. In an effort to strengthen the work Helvetas is doing in this domain and to build on their initial experiences, the GOP team and GSE Coordinator co-organised a 5-days International Workshop in Tirana-Shkodra held on 25-29 September 2017. The Albania team hosted the activity, and in turn shared their rich learning on the subject matter based on their experiences implementing the Decentralization and Local Development Program (DLDP) among others.
The workshop was attended by team members from Albania, Bangladesh, Bhutan, Guatemala, Kosovo, Kyrgyzstan, Lao PDR, Nepal and Sri Lanka.
The workshop promoted an interactive and practical approach, including a field visit day to Shkodra. Each day focused on addressing a specific dimension of Women’s Political Empowerment. The mornings featured more conceptual inputs from both facilitators and pre-identified participants, while the afternoons favored interactive group work and exchange.
The third day of the workshop took place in Shkodra, the home of the DLDP. The trip to Shkodra included a brief visit to Rozafa castle and an interesting photography exhibition at Marubi museum, showcasing the very early historic days of ‘photo-shopping’ where different political and religious figures appearing in original photographs were conveniently absent from altered versions; this was done especially during periods of political turmoil and transition in the country. Following this, the group had the good fortune of being able to visit the local One Stop Government Service Center supported by the DLDP, and meaningfully exchange with the Mayor of Shkodra, Mrs Ademi and with the former-Minister of Urban Development Mrs Gjermeni, and a local council member, Mr. Galiqi.
The exchange raised questions around balancing both personal and professional life, the demands, the challenges and opportunities of being a woman in politics. There were discussions about strategies for engaging youth as the next generation of leaders, how to engage men, and social media influence on their work. The speakers gave recommendations on how civil society and international organizations such as Helvetas can better support in particular women in politics. Training before but also mentoring/coaching during their tenure was highlighted. Emphasis on public relations, visibility including online social media presence support was also suggested among others.
The exchange was very frank and in depth, even personal at moments, as our politicians discussed openly the challenges and opportunities a life in politics brought them.
In the final day of the workshop participated SDC colleagues who in turn actively contributed to a very comprehensive exchange on engaging men for women’s political empowerment.