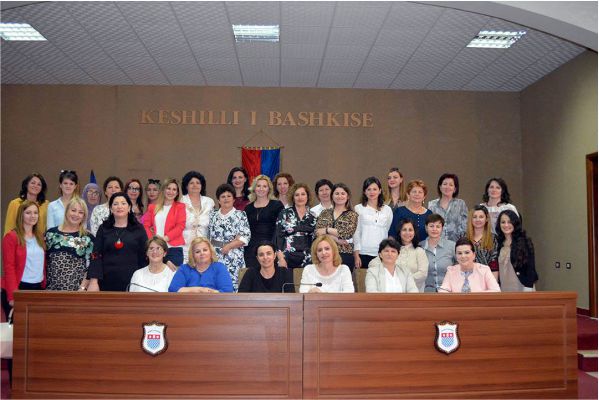 The Swiss program dldp has supported since 2011 the Women in Politics Network, founded initially by women councillors of Shkodra and Lezha Region, to be extended in 2014 with the women councillors of Kukës, Dibër and Durrës Region, and which now enlists over 468 members.
The network, by being a non-official group of women that are part of party structures and their representatives in governing bodies at municipal councils, gathers with no political distinction women whose main aim is the improvement of the community lives, by turning into promoters of local and national changes about issues which are socially and gender sensitive.
In the framework of the continuous support that dldp gives through different activities to the Women in Politics Network, on May 12th, 2017, in the Shkodra City hall was promoted “The Catalogue – Profiles of Women Councillors of Municipal Councils – Shkodra Region”, which includes women councillors elected in the local elections 2015-2019.
In this activity there were invited also the women councillors of Durrës Qark and women that have given a contribution in extending the role of women in local level, such as Klodiana Spahiu and Voltana Ademi.
In this event the women councillors were greeted also by a delegation of German euro-deputies from the Christian-Democrat Union (CDU), who congratulated them for the active and positive role the network has performed through.
The dldp program manager, Mrs Valbona Karakaçi, in her opening remarks praised the fruitful cooperation and the positive will that women councillors have in offering their help in socially sensitive issues.
The MP Klodiana Spahiu stressed the importance of the experience emanating from the work in city councils for women that are up for election in the general elections in understanding general problems and gender issues in local and national level.
The Shkodra Municipality Mayor, Voltana Ademi, underlined the successes achieved by women councillors of Shkodra to help people in need, especially women who head households, through incentives included also in the fiscal package of the municipality.
The Catalogue of Women Councillors aims the promotion of the profiles of these women whose will and ambition is closely linked to the respect toward the faith put on them by the community where they live and for which they work for.